A Week after the Election, the State of the Black World Conference Convenes in Newark 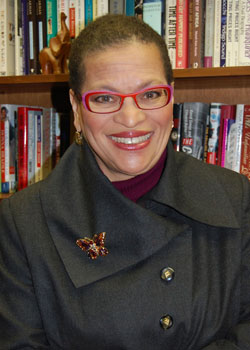 Julianne Malveaux says that we need more Black folks like Ron Daniels to exhibit the amazing tenacity that has kept him on focus and on fire for African American people.

Julianne Malveaux is an author and economist. Her latest book “Are We Better Off? Race, Obama and Public Policy” is available via www.amazon.com for booking, wholesale inquiries or for more info visit www.juliannemalveaux.com

A Week after the Election, the State of the Black World Conference Convenes in Newark

By Julianne Malveaux, NNPA Newswire Columnist
I’m writing two weeks before the November 8 election, writing and praying that Election Day comes sooner than it is supposed to. I did my early vote thing so that I could, if necessary, drop into battleground states like Virginia, North Carolina or Florida to do my bit to get out the vote. And I’m hoping that voters will do the right thing and elect Hillary Clinton, but as I wrote I know that there is the possibility (not probability) that “Mr. Chump” will prevail.

No matter who wins this election, governing will not be a cakewalk. Republicans in Congress have pledged to initiate investigations of Secretary Clinton, matters that have already been thoroughly investigated. They want to know about the emails, the Clinton Foundation, and more. And if Mr. Trump is elected there are likely to be Democrats, who will call for all kinds of investigations of him, not to mention the many women who might well sue him for defamation after he called them liars and proposed that some of them were just looking for their 15 minutes of fame.

Enter Dr. Ron Daniels and the fourth State of the Black World Conference. Each year since 2012, Dr. Daniels has convened activists and leaders to assess the outcome of the presidential election and to coalesce around ways to work together. The conference will be held in Newark, New Jersey, from November 16-20. This year, the theme of the conference is “Racial Healing and Collaboration for Black Empowerment,” and while the conference will feature a who’s who of Black leaders and thinkers (like Susan Taylor, Danny Glover, Marc Morial, Kimberlee Crenshaw, and others), it will also openly solicit the ideas of attendees. Panelists have been limited in the amount of time they will talk so that attendees can also put their ideas out there. The thought is that the many who work in local areas may have ideas that can be taken national. Consciously, Dr. Daniels and his team have structured a conference that encourages conversation and collaboration, especially intergenerational conversation.

For full disclosure, let me acknowledge that I will be receiving an award from the Institute for the Black World on Saturday evening, and that I am part of the Reparations Commission of IBW. And for full disclosure, let me also say how much I admire and appreciate the absolute tenacity that Dr. Ron Daniels has shown for Black people and for the movement toward a progressive agenda. I am always delighted to acknowledge him first as a friend, and also as a colleague.

We need more Black folks like Ron Daniels to exhibit the amazing tenacity that has kept him on focus and on fire for African American people. Too often, our focus is episodic, revolving around public incidents — who got shot today, or who got racially profiled. The fact is that we are all profiled, all day, every day, either frontally or subtly. Just a few are committed to rejecting the subtle profile in both domestic and foreign policy. Dr. Ron Daniels is one of the few, and his work on Haiti speaks to the ways he connects domestic and foreign policy.

Not only do we need more folks to live like Ron Daniels, but also we need more to come to the State of the Black World Conference. Please check out the Institute for the Black World website, www.ibw21.org, and please come to the conference, bring your wisdom to the conversation, if you can. Please help us strategize next steps. November 8 is neither the beginning nor the ending. It is, regardless of the winner, part of the continuum, a moment to ask, again, about the status of African American people.

If you are reading this before Election Day, November 8, please vote. But you must know that voting is not the most, but the least, that you can do. After November 8, please commit to the activism that will advance the status of Black people. Thank you, Black Lives Matter for the work you do. And thank you, dear reader, for embracing the opportunity to make a difference.